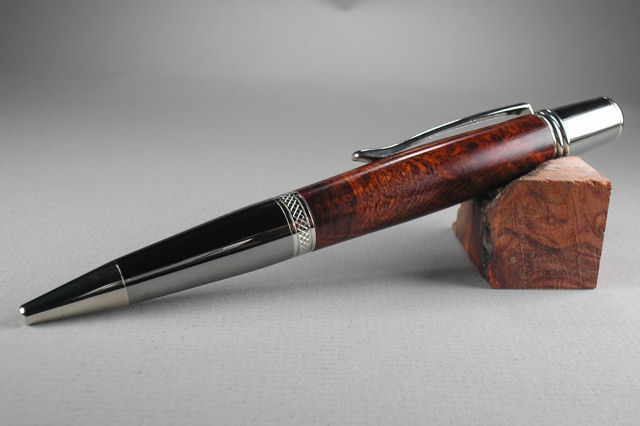 Amboyna Burl wood, which is known scientifically as Pterocarpus Indicus, has been painstakingly extracted from the jungles of Southeast Asia and often transported (at least initially) via elephant.
A rare, exotic hardwood with a fragrant aroma, Amboyna Burl can vary in color from yellow to golden brown to red, and is generally considered one of the world's most beautiful species.

Cocobolo is a hardwood from Central America yielded by two to four closely related species of the genus Dalbergia. Cocobolo is a very beautiful wood, known to change color after being cut. It is typically orange or reddish-brown in color, often with a figuring of darker irregular traces weaving through the wood. It is fine textured and oily in look and feel, and stands up well to repeated handling. Only relatively small amounts of this prized wood reach the world market.

Ancient Kauri radiates its incredible history. While it is similar in density to cherry, with textures similar to basswood, it feels like no other wood. Lost for centuries in the bogs of New Zealand. Radio carbon dating of harvested trees have placed some logs at over 30,000 years. The harvesting of Ancient Kauri is an ecologically sound practice. Because the harvesting of this wood entails no cutting of any standing trees, and all of the land that the trees come from is redressed to its original contours, Ancient Kauri is totally eco-friendly.

These very rare olive wood pen blanks are produced from the trimmings of the olive trees that grow in the mountain of olives in the old city of Jerusalem in the Holy Land. An essential process for a healthier growth for the trees and to generate environmental stability. No Tree is damaged or destroyed in the process of harvesting this wood. Each pen comes with a certificate of authenticity.